Nikon Europe B.V. and all Nikon subsidiaries in Europe are closely monitoring the situation with COVID-19 (coronavirus) and following the guidance of each local health authorities. Learn more about the measures we have put in place.

During meiotic prophase I homologous chromosomes undergo pairing/synapsis and paternal and maternal chromosomes exchange genetic information. It is known that HORMAD proteins (HORMAD1 and HORMAD2) localize along the unsynapsed chromosome axes at that time, and that they monitor homolog synapsis. However, the molecular mechanism by which HORMAD proteins, which do not contain a definitive DNA-binding domain, localize to the chromosomal axes is still unclear. This application note introduces the study that clarified the mechanism by which HORMAD1 localizes to chromosome axes, and its interactions with the meiotic cohesins RAD21L and REC8, this study being the result of joint research conducted by Dr. Yasuhiro FUJIWARA of the Laboratory of Pathology and Development, Institute for Quantitative Biosciences, The University of Tokyo, and Dr. Kei-ichiro ISHIGURO of the Institute of Molecular Embryology and Genetics, Kumamoto University. 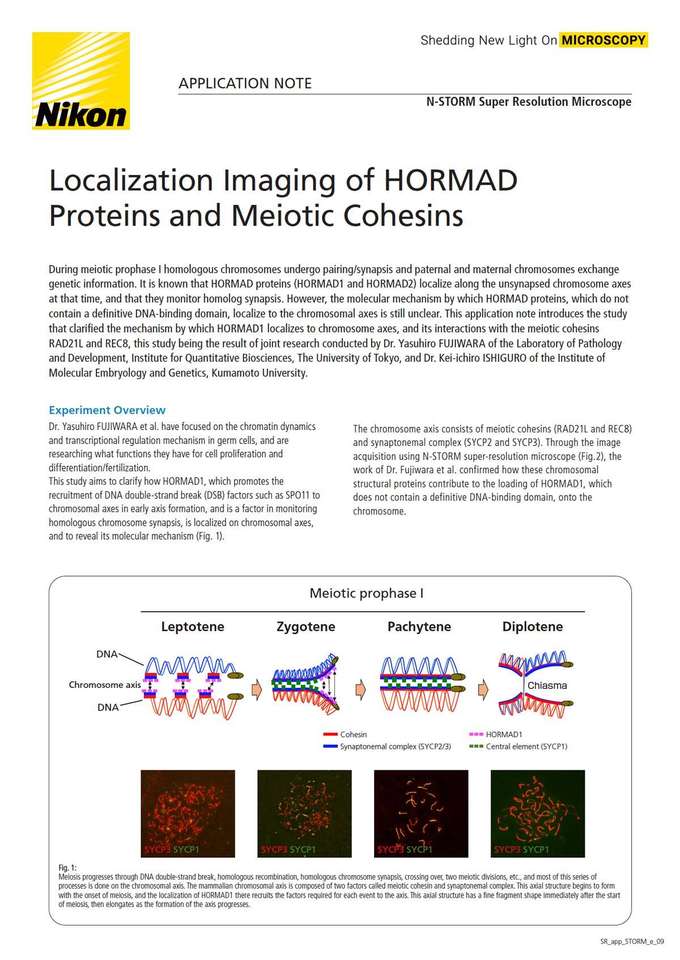 Dr. Noriko Koganezawa (Life Science), Department of Neurobiology and Behavior, Graduate School of Medicine, Gunma University, focuses her research on drebrin, an actin-binding protein that is thought to play an important role in cognitive function. Drebrin accumulates in the posterior synaptic region (dendritic spine) of mature neurons, but when synaptic dysfunction occurs, this accumulation disappears. Also, when the NMDA receptor is activated by glutamate or the like, the accumulation of drebrin is transiently eliminated (Figs.1 and 2). Focusing on the dynamics of drebrin, Dr. Koganezawa is conducting research to verify its effects on cognitive function.

In this Application Note, we introduce examples of image acquisition of changes in the localization of drebrin by glutamate stimulation using the N-STORM super-resolution microscope and quantitative evaluation by cluster analysis. 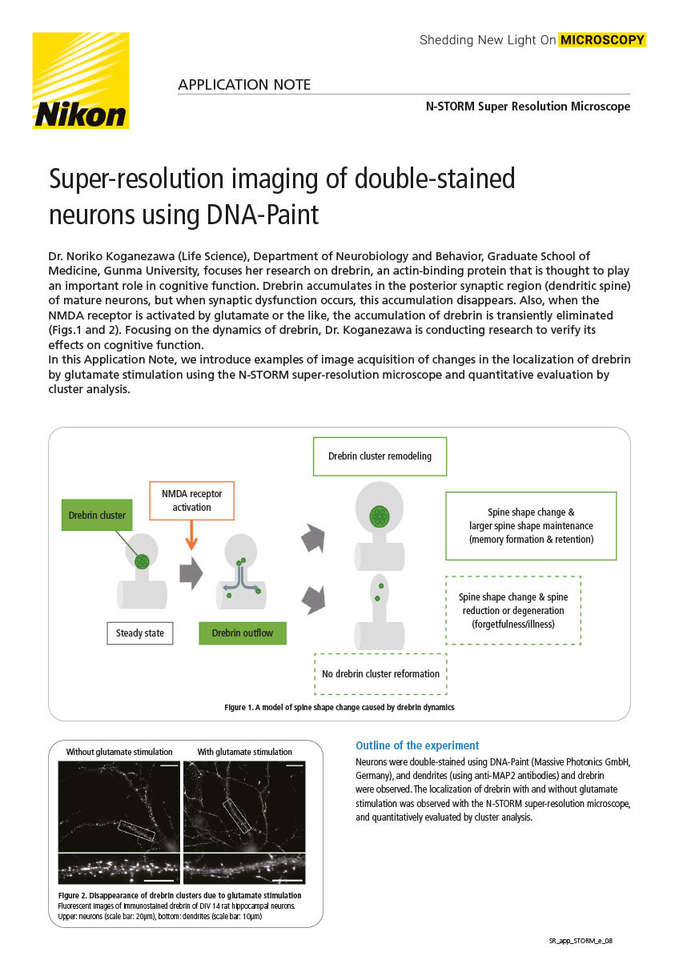 Microglia are the main immune cells in the brain, and play roles in brain homeostasis and neurological diseases. However, the fundamental mechanisms underlying microglia-neuron communication remain unclear. Dr. Csaba Cserép, Dr. Balázs Pósfai and colleagues, (Laboratory of Neuroimmunology led by Dr. Ádám Dénes, Institute of Experimental Medicine) identified an interaction site between neuronal cell bodies and microglial processes in the mouse brain and studied the function of microglia (C. Cserép and B. Pósfai et al., Science 10.1126/science.aax6752 (2020)). In this Application Note, we introduce how the structure of neuron-microglia junctions was revealed on a nano scale resolution using the confocal and super-resolution microscopes. 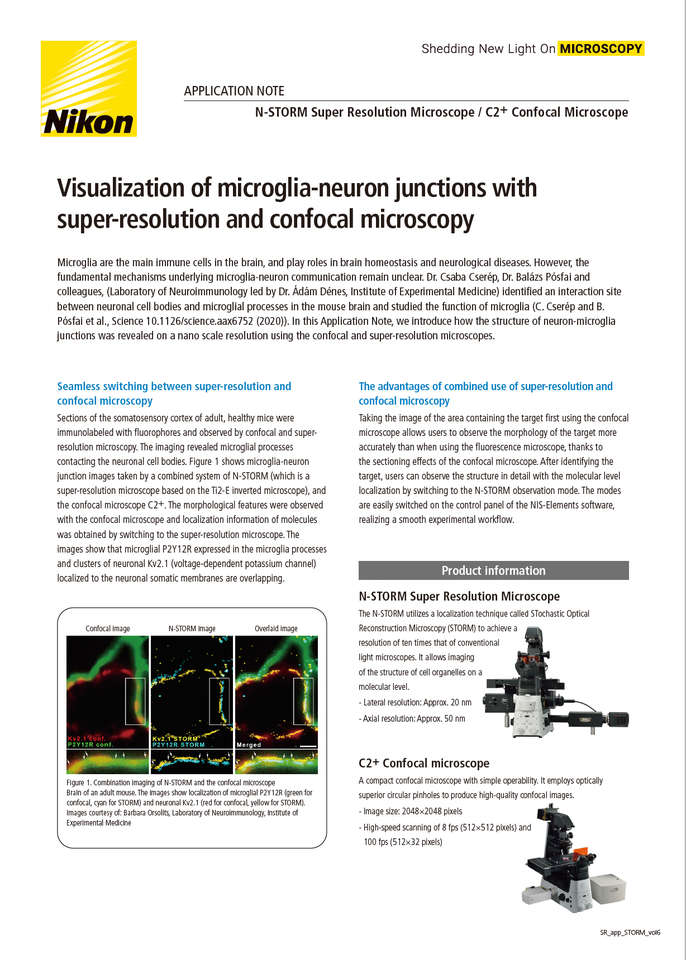 DNA-PAINT is a technique for single molecule localization microscopy. The sample is immunolabeled with specialized secondary antibodies conjugated to short DNA oligomers known as docking strands. Complimentary oligomers conjugated to fluorophore, known as imaging strands, are introduced in the imaging buffer and will transiently bind to docking strands – allowing single molecules to be localized. Herein multicolor and 3D DNA-PAINT is demonstrated on the Nikon N-STORM 4.0 system. 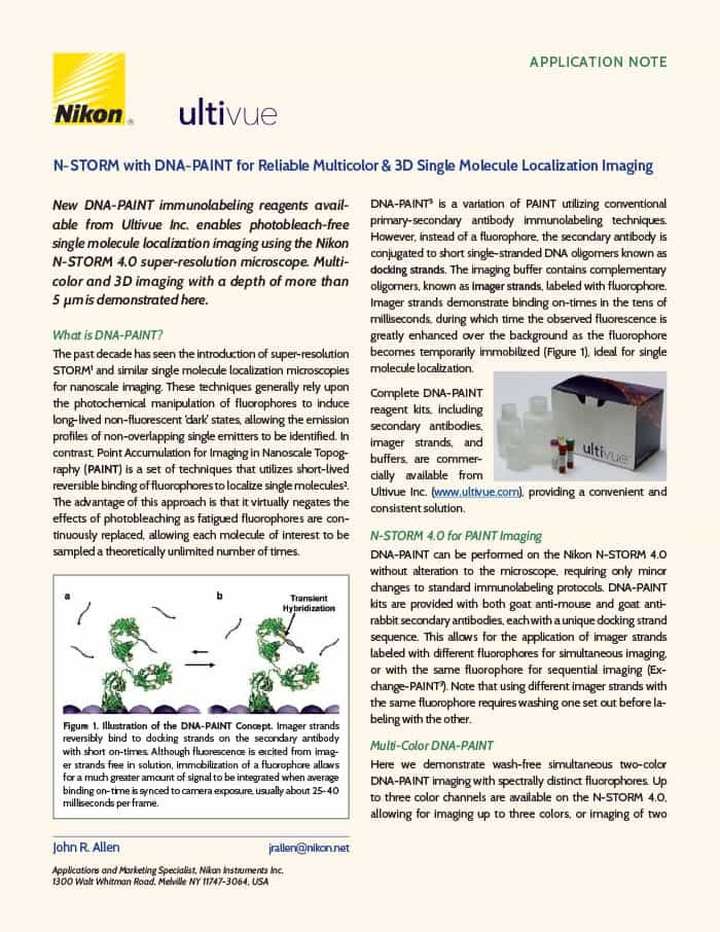 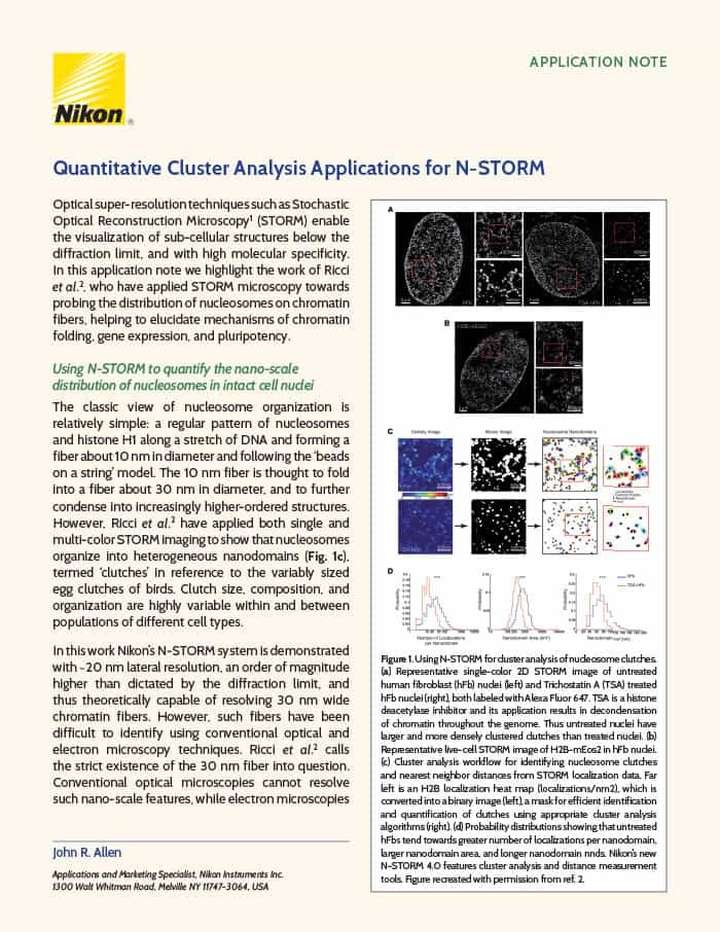 Stochastic Optical Reconstruction Microscopy (STORM) has had a significant impact on our understanding of nano-scale biological processes. In this application note, we see how Nikon’s N-STORM system, combined with quantitative analysis tools, enables single molecule level studies of cannabinoid signaling in the brain. Correlative 3D-STORM, confocal microscopy, and patch-clamp electrophysiology is also explored. 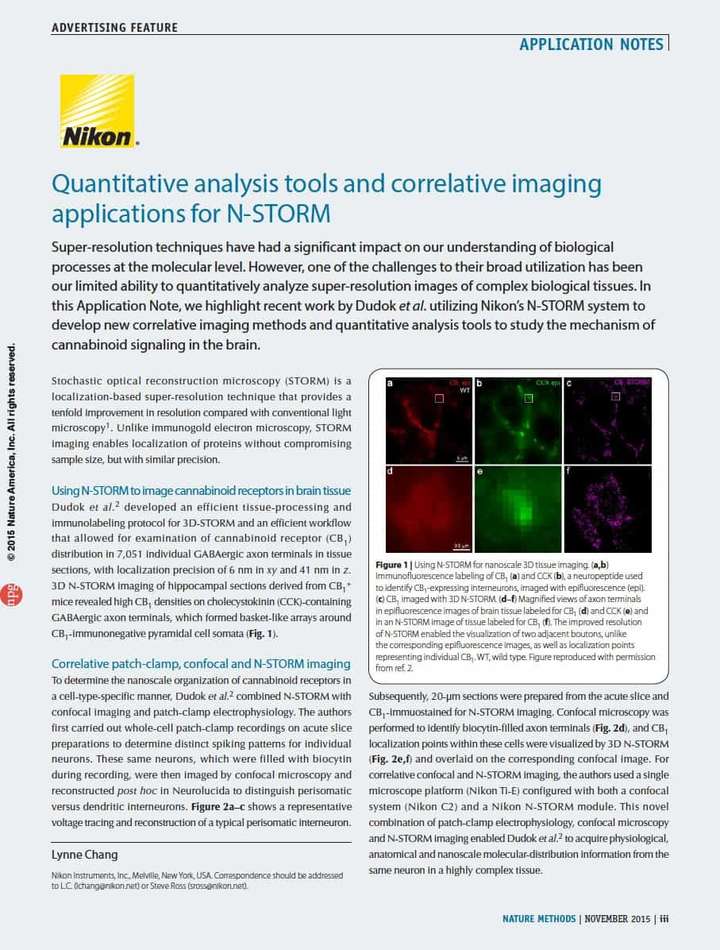 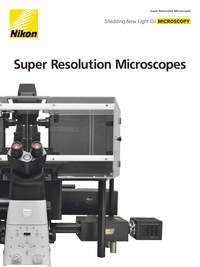