Deep imaging in whole organisms, organs, and tissues is one of the greatest challenges posed to the light microscopist. Biological samples are optically imperfect environments – scattering both illumination and detection light. Scattering and various optical aberrations become progressively worse with increasing distance into the sample, ultimately imposing a practical limit to the possible imaging depth.

Nikon’s leading solution for deep imaging applications is the AX R MP Multiphoton Microscope System. This system supports excitation wavelengths of up to 1300 nm, allowing for imaging as deep as 1.4 mm into the sample. It is also possible to simultaneously scan with two beams, accelerating multicolor multiphoton image acquisition.

For imaging at depths of up to approximately a few hundred micrometers (µm), Nikon offers the AX / AX R Confocal Microscope System. Confocal detection with a single pinhole, as with the AX / AX R, allows for greater out-of-focus light rejection and optical sectioning when compared to confocal instruments utilizing a pinhole array. 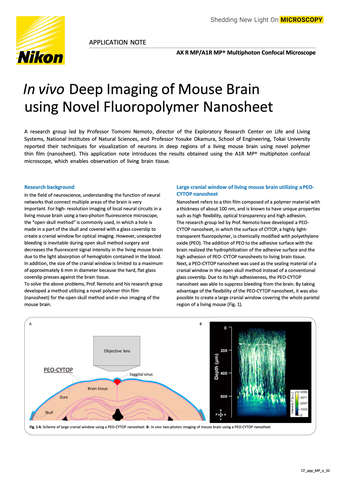 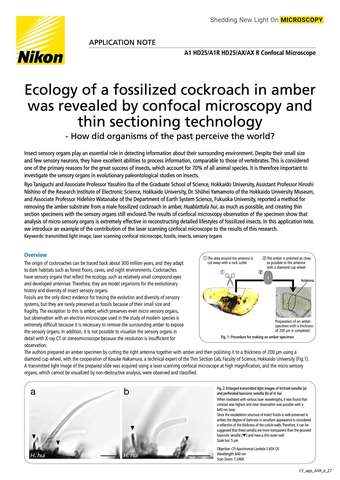 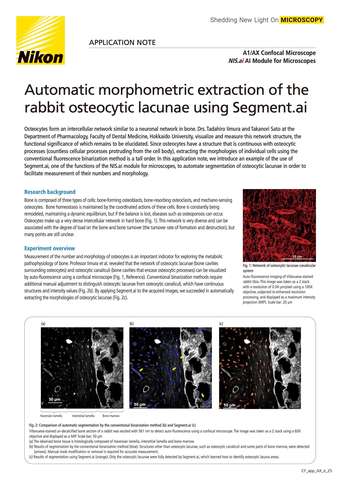 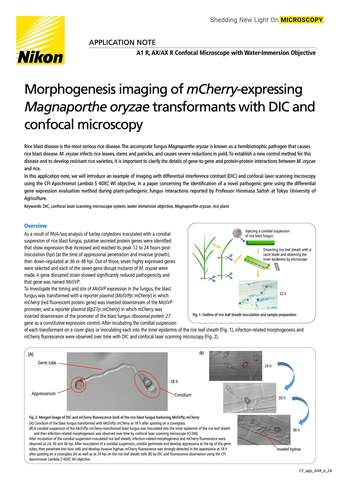 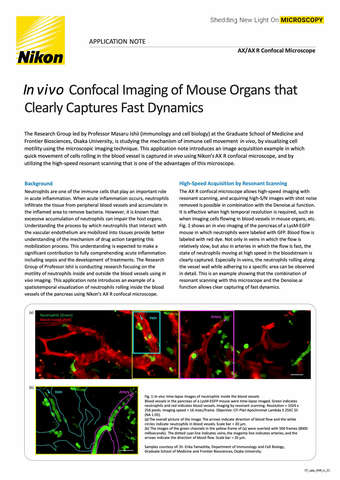 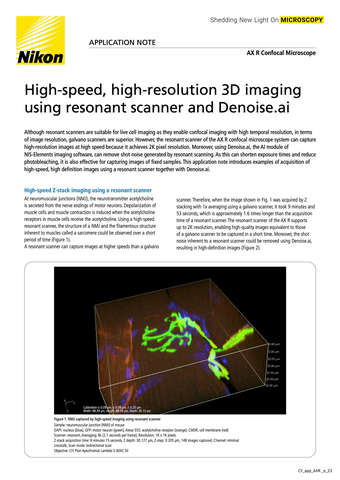 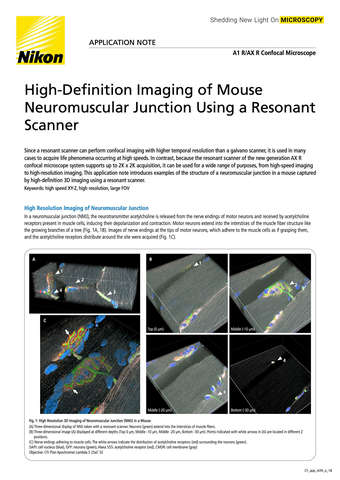 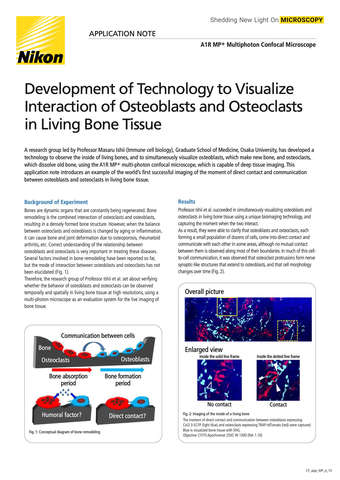 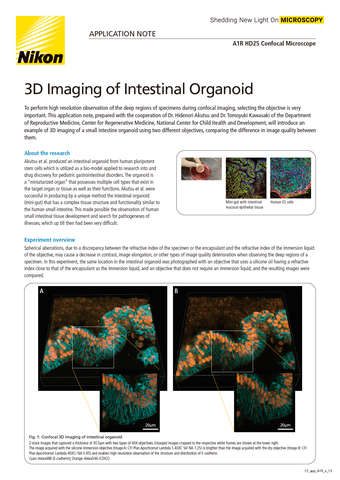 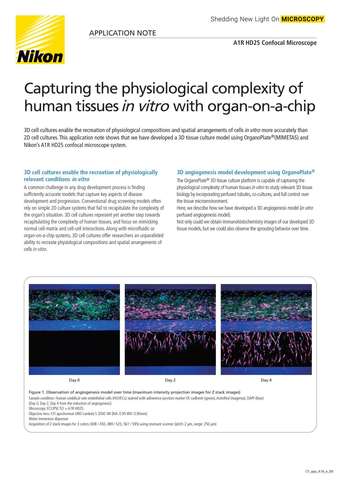 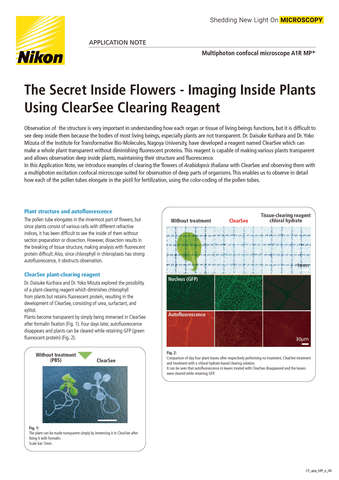 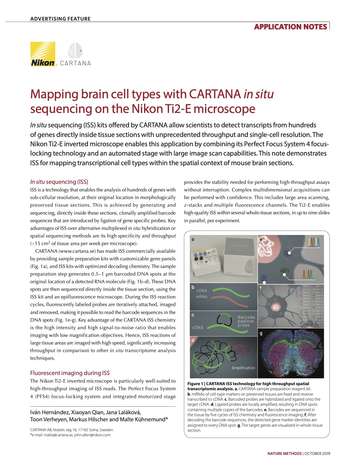 The renewed development of optical clearing methods for increasing the transparency of biological tissues has allowed for improved observation of larger and more complex samples. Relatedly, super-resolution expansion microscopy sample preparation methods physically increase the size of the sample, usually by a factor of ~4 – 10X or more, and thus also demand instruments suitable for deep imaging.

When observing thick samples using a microscope, it is of the utmost importance to minimize the difference between the sample’s refractive index and that of the immersion medium in order to best mitigate spherical aberration, which limits image quality and the usable working distance. Nikon offers objective lenses for imaging cleared specimens that can be directly immersed in a variety of clearing media and include correction collars for refractive index (RI). These objectives also feature long working distances, high numerical apertures, and more.

There are strategies beyond just spatial filtering of light, as with a confocal microscope, for improving the ability to image deeper. One approach, which can be implemented on any fluorescence microscope, is to use probes with more red-shifted excitation and emission spectra. Longer wavelength light is scattered less and thus suited to deep imaging. Far-red and near-infrared (NIR) spectrum imaging is possible on both the AX / AX R and CSU-W1 series of confocal instruments.

The benefits of using longer wavelength illumination are compounded when combined with multiphoton excitation – the process whereby a fluorophore that is usually excited by a photon of a given energy/wavelength can instead be excited by two or more longer-wavelength photons with similar total energy. This process is almost non-existent in nature as the probability of multiple photons of the correct energy being absorbed by a fluorophore at nearly the exact same instant is extremely low.

In practice, achieving multiphoton excitation requires a very high-powered femto-second pulsed laser, and even still the power density is only high enough to excite fluorescence at the beam focus. This essentially eliminates out-of-focus fluorescence excitation and more-or-less obviates the need for a pinhole aperture to filter out-of-focus emission. While a pinhole aperture can still be used to help improve optical sectioning, it is usually desirable to instead maximize the detected signal, as scattering and other issues remain.

Compatible Microscope Stands
This refers to the Nikon microscope stand models that are compatible with each system.
Detector Options
Point-scanning multiphoton and confocal systems generally utilize single element detectors, such as photomultiplier tubes (PMTs), while spinning disk confocal and widefield instruments utilize digital cameras.
Field of View
The field of view of the system, also referred to as the field number, is the diameter of the imaging area at a nominal 1X magnification.
Relative Imaging Depth Limit
This indicates the approximate Z (axial) depth range within which the indicated system is able to deliver images with sufficient optical sectioning quality and signal-to-noise. This value can be quite variable and depends heavily on the optical properties of the specimen and vessel, as well as the labeling.
Supports Video Rate Imaging
“Video rate” is traditionally defined as about 30 frames per second (FPS). Optimal imaging rate depends on exact application, and may be faster or slower than 30 FPS. EM-CCD cameras can typically image up to 60 FPS (full frame) and sCMOS cameras up to 40-100 FPS (full frame).